Most statically typed languages use the concept of nominal types.

If I create two structs in a language like C:

I can’t cast value of one to the other:

In TypeScript, the equivalent is perfectly valid:

This is because the properties of Point2D and Point3D overlap, or more specifically the type of Point2D is a subset of Point3D.

This works because TypeScript is concerned with the shape of a type, not the name. What a type has not what it is. Types are essentially explicit declarations of duck typing.

We can use this to our advantage, and declare types in multiple places (say the model and the view), and the TypeScript compiler will check for us that the values we use are all in agreement with those types.

There’s some differences between types and interfaces in TypeScript. As this chart shows though, they offer very similar capabilities: 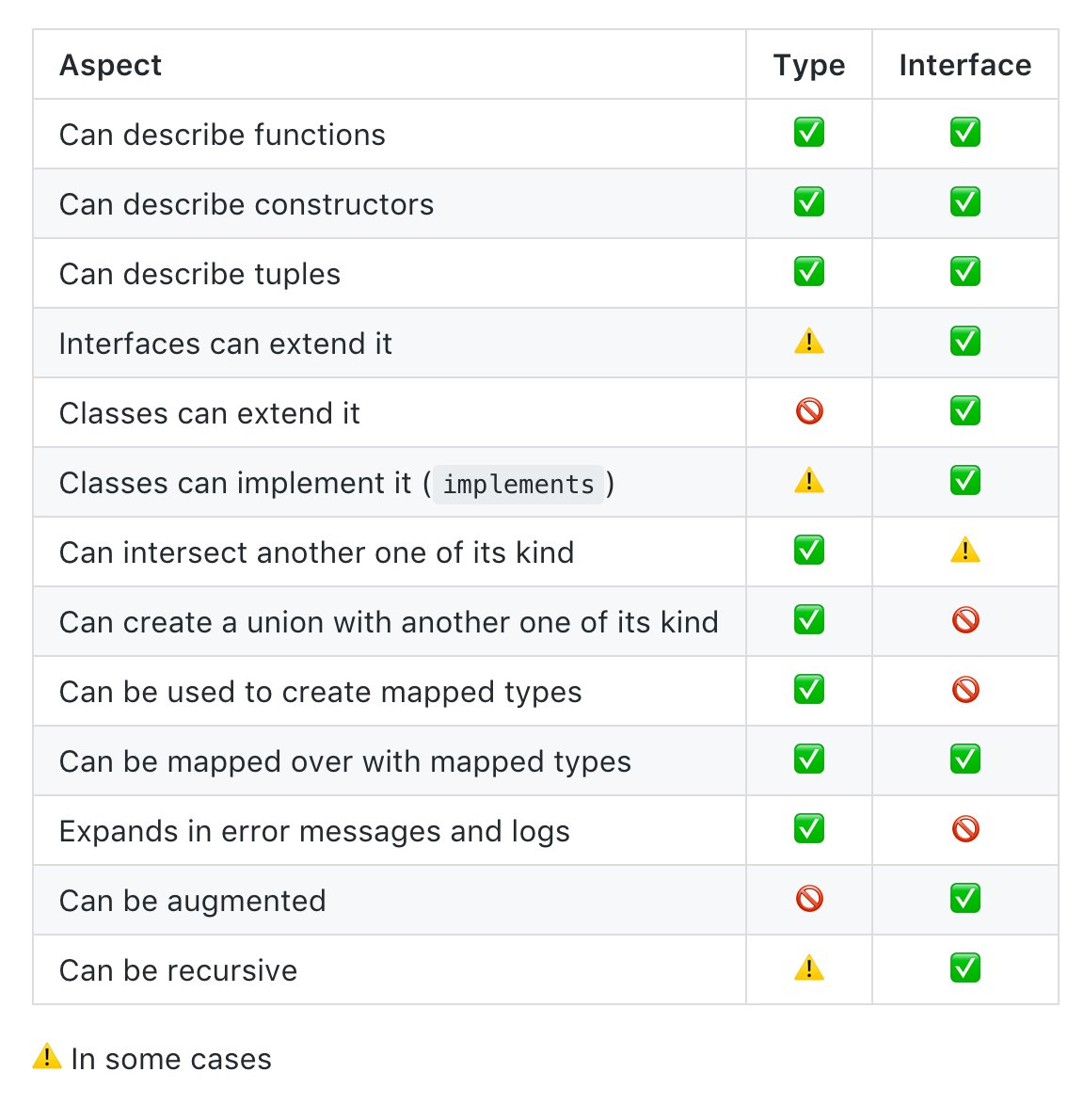 If I am combining types, then I generally will switch to using the type keyword and it’s ability to intersect & and union | types together. Or if I simply want an alias to an existing type, I will write: type BlockID = string.

Use an interface named after the component with a Props suffix. Remember to export it too as your tests probably want it.

Use the function keyword for top level functions

Compare these two ways of declaring a function component in JavaScript:

There’s not much difference, but I prefer the latter as:

In TypeScript I think the argument for using the function keyword becomes even stronger:

The top version using function has these benefits:

Classes need more ceremony. The need to be instantiated, they can have properties changed over time, and they offer a range of approaches for achieving the same thing.

Functions are called with some input and return some output, and usually have just one way to achieve something. This leads to simpler code and more consistency between developers. They encourage the principle of single responsibility.

Functions are also easier to test — given input X, the expected output is Y.

Examples of things that could be a function:

You can see the single responsibility being enforced here — there’s a single verb and one or two nouns.

Functions should ideally be deterministic and referentially transparent. Woah — what are these words? In English:

To understand, it might be worth asking what if our functions didn’t have these properties:

What is a React component?

With these concepts down, it’s worth asking what is a React component?

A React component is a deterministic and referentially transparent function that takes in props as input, and produce changes to the DOM as output.

The general life-cycle of the React engine is:

There are a few things to note here. The DOM isn’t actually changed until step 5! Our components are merely instructions to the React engine.

The contract that React provides to developers is:

Therefore our jobs as developers is to produce well designed components that map to the HTML we want. We have no control over when renders happen, and we shouldn’t try to micro manage the React engine. Doing so can actually give the React engine more work to do, and also defeats the whole purpose of breaking our apps into easy-to-read components.

What is a React element?

A React element is an description of what DOM element we would like created for us.

This is equivalent to writing:

It’s not a DOM element — it’s a React element. A button DOM element has behaviour and state and overhead that is not needed to describe what button we would like.

A button DOM element is expensive to create. Every time our component is rendered, we don’t want to create a whole new button from scratch.

So React elements are light-weight. They aren’t much more than vanilla JavaScript objects. They are cheap to create, and so that’s what our component use to describe with.

React will then read that description and manage the creation of the actual DOM elements for us — and update them if they have already been created.

What is a React hook?

A React hook lets component authors perform more advanced things outside the pure props to HTML contract of components. You can use them directly, or wrap them into higher level patterns.

Composition has the following benefits:

Components must have consistent identity

React uses the identity of a function component to know whether the implementation is the same. If the function identity changes from render to render, then React will entirely destroy-then-recreate that subtree of the DOM.

This one uses a nested component, which we ask React to render (<Body />):

This one uses a nested function, which we call (renderBody()):

The first with the nested component will destroy the <div> every render, because from React’s point of view, it is being managed by a totally different component each time, and so to be safe it must be reset and cleaned up.

The second with the nested function is referentially transparent — it makes no different to React whether how the <div> React element got there. All it sees is an <h2> and <div> inside an <article>.

The second behaves no differently to:

For this reason, I would recommend that components are functions that are declared at the top level of a file. A function declared nested inside another will be different each time that outer function is called — so either call these functions yourself or extract them out.

Once elements & props are given to React, they mustn’t be mutated

When you return an element tree from a component, it might be used immediately or it might be scheduled for use later.

If you kept a reference to an element you returned and mutated it later, React might see an inconsistent view, causing the result to be unpredictable or for it to crash.

React relies on immutability. It avoids creating defensive copies of elements and props, as that would just be overhead.

Use React.cloneElement() to create a copy of an existing React element with changed props.

Use React.Children.map() to work with children.

Learn how to name components. Apply the single responsibility principle. Find the indivisible component units, and compose them together into larger molecules.

Extract common styles. Define a style guide. How do you keep styles consistent?

What sort of components should be resuable? How granular should you go?

When do you need a pattern library? Who are they for? How should you manage them?

Test your data flow in isolation. Use test-driven design. Mock APIs and other sources.

Components are really composable. Can we reduce boilerplate? What useful component utilities can we make?

Handle errors from publishers. What and when should you show users?

Learn how to name components. Apply the single responsibility principle. Find the atomic units, and compose them together.

Improving performance in the right areas

Learn when you should focus on performance. Measure to be informed. Apply optimization techniques.

Produce screenshots across many devices.